Moving into California – The Do’s & Don’ts

So, you’re considering moving to California. No surprise, if you’ve ever visited, we certainly understand. It’s one of the most populous and culturally rich states in the union. There‘s a lot to like about the Golden State. But before you pack the SUV and break out the maps, let’s take a few moments and look at the pros and cons of making the western coast your home.

The Case for Not Going 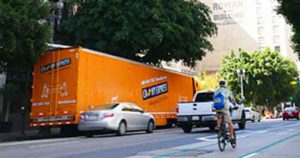 Shake, Rattle, and Roll. If you watch the news at all, you know that California is earthquake central, at least as far is the United States are concerned. Sure, other states have them, but none with the frequency or intensity as seen in California. California’s coastline is nicknamed “the ring of fire” as it is comprised of numerous volcanoes and other seismic locations along the edges of the Pacific Ocean. In addition, the legendary San Andreas Fault runs through California. Throw in the almost yearly wildfires and you certainly have enough reason to second guess your decision to move.

The Tax Man Cometh. Tax rates in California are among the highest in the nation, with a statewide rate of 7.25%. Some areas have more than one district tax. In addition, pries for essentials such as gasoline are usually much higher than can be found elsewhere in the country. Housing prices are also much higher than the nation’s average. Expect to pay more overall for your standard of living when you put down roots.

No Friend of Small Business. California is currently listed as the 48th worst state in the country for small businesses, behind only New York and Hawaii. This is the result of over regulation and higher than average tax rates. And when small business suffers, everybody suffers, since after all, small businesses are the backbone of American industry.

Traffic Blues. Especially in the more congested and populated areas such as LA, traffic can be a nightmare. 45-minute commutes one way are common. At the other end of the spectrum California is a big state, which means exploring all of it would require racking up some serious miles.

Have we talked you out of it yet? Are you still with us? If so, let’s look at the reason you might want to move to California.

The Forecast for Today. Whether you settle in north or south California, you’re in for a real treat as far as weather is concerned. With year-round median temps between 70 and 80 degrees, it’s never too hot, and with cooler days only dipping into the 50s, it’s never too cold either. If all you’ve been used to are the seasonal extremes found in the Midwest, North or South, California should demonstrate itself to be a welcome respite.

Foodies, Unite! California boasts a wide variety of food options, either through independent marketplaces or the thousands of restaurants, coffeehouses and eateries that populate every corner of the state. California is also home to what is commonly referred to as “wine country” in the northern locale of Napa Valley, along with some 3600 other wineries representing some of the finest wines and ales in the world.

Y’all Come! Okay, that’s a Southern-ism, but California is proud of its place as one of the most diverse states in the lower 48. Bordering Mexico, there is a sizeable Hispanic population, not to mention residents of every religion, race, political persuasion and every conceivable combination thereof. If you believe diversity is the spice of life, then California is for you.

It’s a Big State…A Really Big State. California boast almost 900 miles of coastline, and has everything from the towering Sierra Nevada mountains, the deepest valleys, lush forests and desert land. It is also home to Yosemite and Sequoia National Parks. You could vacation for years without ever leaving the state. California’s legendary Highway 1, also known as the Pacific Coast Highway, takes you along 583 miles of coastline all by itself, starting in San Diego and ending up in San Francisco.

Technology Rules. California is home to some of the biggest and most successful technology companies in the world, including Apple, Facebook, Google and others. If you are a techie looking to make a change, California provides ample opportunity to do just that.

Turn Up the Music. California has been a trendsetter in music pretty much from Day One. What happens in California musically almost always ends up influencing the rest of the nation. It was home to the counterculture movement in the 60s and was home to some of the most popular and endearing performers from the 70s. Even the hard rock and metal scene of the 80s and the emerging rap and hip hop of the 90s had their roots in the Golden State. California also boast some of the finest music schools and colleges in the nation.

Lights, Camera, Action! Of course, California is also known as the hub of the movie industry in the us. LA and Hollywood remain the epicenter for domestic film production and distribution, as well as being on the forefront of new and innovative digital technology that impacts film production around the world. Some of the most popular and highly regarded film school, such as USC, are also located here.